Posted on March 8, 2014 by jennyjennygenesis 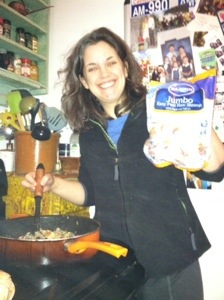 One of the many beautiful things about being Catholic is the traditional foods that naturally come with the Liturgical Calendar, throughout the year. I really appreciate the different seasons we have that follow the life of Christ. I suppose in part because I’m a homeschooling mama, I think about the fall as the beginning of the Liturgical Calendar, with Ordinary Time quickly turning into Advent, which is the four weeks of preparation before we celebrate Christmas- with many opportunities for fantastic feasts full of decadence and joyful treats…this year my sister in law taught me how to make an easy delicious family-sized Ruben that we devoured on Christmas Eve…
We have turkey or ham for Christmas dinner and always several types of amazing cookies… Then we have another stretch of Ordinary Time until we reach Lent, which began this week on Ash Wednesday… Before we don our ashy heads, we have one of the most food friendly holidays of the whole year: FAT TUESDAY! Also known as Shrove Tuesday, Mardi Gras, or Carnival- around the world, there are many fancy and tasty foods that come with it! Historically, all the fats and sugars would be used up before Lent, as it is a time to repent and make sacrifices by fasting from rich foods for the purpose of purification before the most special of all the celebrations in the year: Easter!! When Jesus Rose from the Dead, our lives were forever changed… And the gates of heaven were opened to us so that we too can spend Eternity with The Lord! So we really do it up big, and this year we made Chicken and Shrimp Jambalaya with Andoullie Sausage, and one of the very best inventions of all time: the Paczki or Polish Donut! I prefer the custard filled variety, but they come in many flavors: the ‘original’ is lekvar or prune, but now we have cherry, apple, and many others;) It’s pretty delish, and we look forward to joining the masses as they run to our neighborhood’s gem, ‘Dom’s Bakery!’ Then during Lent we fast and eat simple foods. For Lent we ask “Catholics 18 years-60 years old to reduce the amount of food eaten from normal. The church defines this as one meal a day, and two smaller meals which, if added together, would not exceed the main meal in quantity. Fasting is obligatory on Ash Wednesday and Good Friday. Also children 14 yrs and older and adults do not eat meat on Fridays. All people who are sick or frail, or a pregnant or nursing woman are excused from fast and abstinence.”
I never turn down a challenge, and this Lent I was sure I could figure out a great recipe to entice my not so interested children. They will eat tuna, but not so much of anything else if it’s called fish! Our family has been enjoying watching Cake Boss on Netflix this winter about a big Italian Catholic family that runs a bakery in Hoboken, New Jersey. In an episode I watched recently, Buddy takes his family to Italy where his parents grew up for a cousins wedding. It was a time of fun and celebration, and showing his three young children around the place. Buddy takes his son fishing, and later in the show they film Buddy preparing the fish. I tried my very best to imitate what I saw, and my family LOVED IT!
Here’s what I did:
Italian Broiled Talapia
Spread olive oil on a sheet pan with 5 cloves crushed garlic, one onion large diced, two 14.5 oz cans of diced tomatoes (juice drained) with two teaspoons of dried basil, a teaspoon of garlic salt, and a teaspoon of black pepper. Toss all together and then cube 4 fillets of tilapia and spread out evenly on top of the veggies.
Broil on high for 5 minutes or until the fish is cooked through. It is never fun to eat over cooked seafood, so if need be, remove the fish and cook veggies longer. The fish will cook quickly. Eat on top of rice, or noodles!

← Confessions of A Worry Wart
Praying With Children- the Fun Way! →